DUTY – The Life Of A Cop 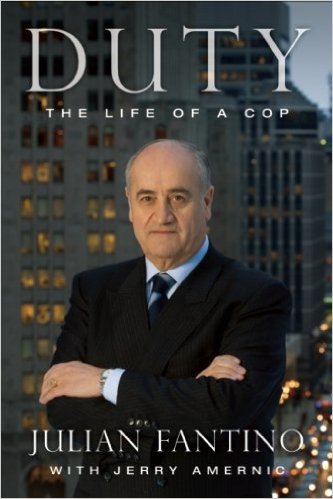 From Beat Street to City Hall, the real story of a big-city top cop.

Julian Fantino is the highest-profile police officer Canada has ever produced. In a remarkable career spanning almost forty years, he has led four police forces and continues to leave a huge imprint on law enforcement, not only in this country but right around the world. This candid and hard-hitting memoir of his lifeâ€”from his humble beginnings in Italy to his move to Canada and his eventual rise through the police ranks, from a street cop on the beat to top cop in the biggest city in the country – recounts his experiences as a rookie fresh out of police college and his time in the drug squad, homicide, and other areas of policing.

He tells about the hard realities of organized crime, especially the fight against the Mafia and outlaw motorcycle gangs, and offers insights from
one who is in the trenches into the sexual exploitation of children, police corruption, terrorism, and the many failings of the justice system. He touches on issues of concern to all Canadians and delves into the pressures and politics of being a big-city chiefâ€”at the local, national, and international level â€”including battles with special-interest groups and the media.

But as Fantino describes in this refreshingly candid and hard-hitting as-told-to memoir of his life, one thing never changed: his steadfast commitment to the principles of integrity, honesty, and accountability. He recounts with passion, humour, and honesty the ups and downsâ€”the joys and sorrowsâ€”of a life devoted to public service.

Always upfront and willing to tell it like it is, Fantino is just as candid about where he thinks the system has gone wrong . . . and what we might do to make it right. Duty is an unflinching behind-the-headlines portrait of what it really means to be a cop.

Through the years Julian Fantino has advised, assisted, and supported me as I continue to strive for a more equitable justice system. This book gives some insight into the man who is the embodiment of a dutiful cop.

A copâ€™s cop lets us eavesdrop on the journey of his life from the streets of Italy to a well-earned, stellar international reputation and the top job in four different police forces.

While not strictly a business book, the memoirs of former Toronto police chief Julian Fantino, DUTY: The Life of a Cop, outline the executive leadership skills and unwavering sense of law and order that moulded him from humble Italian immigrant into this countryâ€™s most high-profile copper.

This book is (also) a tell-it-like-it-is platform for Fantinoâ€™s opinions on a wide range of law enforcement issues. If you want to get your head around who Fantino is and what drives him, read this book.

Ontario Provincial Police Commissioner Julian Fantino has undertaken to set the record straight in an illuminating autobiography entitled: Duty: The Life of a Cop, which he wrote with the editorial and research assistance of Toronto writer and consultant Jerry Amernic. That Fantino felt the need for such a book is understandable: In recent years, few public figures have been more frequently and viciously maligned than he.Â  Altogether, Duty: The Life of a Cop is a fascinating and informative account of the life and thinking of one of Canada’s most accomplished police officers. While Fantino might not always be right, his well-informed views on key issues of public safety deserve consideration.

Julian Fantino, currently Commissioner of the Ontario Provincial Police, is probably the highest-profile law-enforcement official in Canada. In this hard-hitting memoir, he tells the story of his life, from his humble beginnings in Italy, his early years as a beat cop in Toronto, his experiences in the drug squad, homicide and other areas of policing, to his leadership of four major police forces. Along the way, he provides insight into the struggles against organized crime, the exploitation of children, police corruption, terrorism, and into the justice system.

Jerry Amernic is a Toronto author of fiction and non-fiction books. In doing his research for The Last Witness, he interviewed such people as noted Holocaust historian Sir Martin Gilbert, and met with real-life survivors who were children when they were liberated in 1945. Read More